Recently relations between Russia and Turkmenistan have gravitated around the Russian efforts to ensurethe gas import from Turkmenistan.
Russia is competing with China, EU and US to gain access to Turkmenistan's rich hydrocarbon resources.[1] 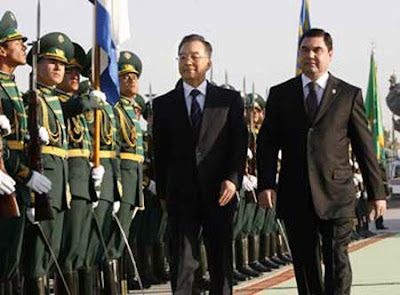 Turkmenistan is also exporting a large amount of gas to China, and the figures vary between 30-45 bcm. However, the problem with sales to China is that some part of the gas Turkmenistan is exporting is counted as repaying multi-billion dollar Chinese loans to develop Turkmen gas fields and building of the pipelines connecting Turkmenistan to China.
"China and Turkmenistan have never made the deals they have reached public, so it is difficult to know how much gas China is taking as repayment or even how much China is paying for the gas, though there were some reports a few years ago that suggested the price was just under $200 per 1,000 cubic meters," - Bruce Pannier, an expert on Central Asia noted. 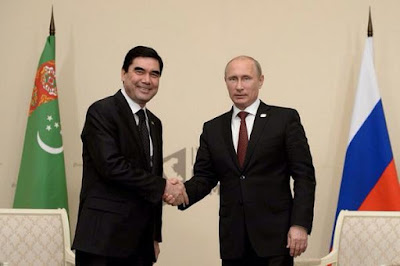 Bruce Pannier, an expert on Central Asia, and the Senior Correspondent at Radio Free Europe/Radio Liberty, believes that the biggest problem Turkmenistan faces, is from Russia.

"TAPI is routed through Afghanistan and the Baluchistan region in southern Pakistan, two areas facing huge security problems. Russia, at least, and probably Iran will oppose construction of the TCP on the grounds that the legal status of the Caspian Sea is not yet decided and there could be dire environmental consequences from the pipeline. Recent Russian Navy activity in the Caspian Sea guarantees no one could build the pipeline without Moscow allowing it," he noted.
Commenting on possibility of acceleration of energy projects envisaging export of Turkmen gas to various countries, the expert said that despite the fact that the Turkmen government wants very much to diversify gas export routes and is pushing both Turkmenistan-Afghanistan-Pakistan-India and the Trans-Caspian pipeline projects, there is little chance either of those projects will even  come close to being completed.
In other news, material and financial gains were not the main motivation for Gazprom, the Kremlin has a much larger strategy.
Russia has a special power and is regarded with frustration by US, not only for controlling the gas export from Central Asia.
Also, Russia ensured that gas transports pass through its territory, not on alternative routes of pipelines, assuring that it is the main gas exporter to Europe.
The cheap gas era being over, European companies can not measure power with Gazprom.
More Russian oil and gas companies are expanding their wings in Latin America, which is "the backyard of the USA".
During President Chavez’s visit in Moscow on 22 July 2008, three Russian companies, Gazprom, LUKoil and TNK-BP[6], signed agreements with Venezuelan state company, PDVSA, and will replace American giants ExxonMobil and ConocoPhillips in Venezuela.
At the signing ceremony, Medvedev said:  "We have not only approved these agreements but have also decided to supervise their implementation."
Chavez responded, "I look forward to seeing all of you in Venezuela."[7]
After signing the agreements between Gazprom and Turkmenistan, coincidentally or not, Russian Prime Minister, Igor Sechin, traveled to Beijing to discuss with his opponent Wang Oishan, an energy initiative called "energy negotiation mechanism".
Press participation was forbidden to negotiations on the energy cooperation.
Local press immediately pointed out the importance of negotiations and bilateral cooperation between that two countries.
Also, it noted that Russia should turn their gaze from western countries and focus on countries in the Asia-Pacific region.
Relations between China and Russia at that time ware at the highest levels ever, settleing disputes on border issues and holding military combined exercises.
These russian geopolitical implications in Central Asia, are very serious movements in counterbalancing the United States and E.U. efforts[8] to seek alternative gas supply routes to Europe.
In this case, realization of such projects will critically depend on gas reserves from Turkmenistan, Iran and Azerbaijan.[9]
For now, Russia supplies about one-third of Europe’s gas needs, half of it shipped by pipeline through Ukraine. But the EU has been constantly searching for alternate sources. 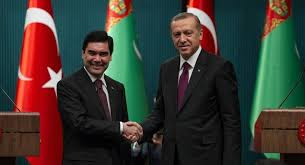 Turkey’s president, Recep Tayyip Erdogan, has said that the TANAP[10] conduit would be able to accommodate gas from Turkmenistan.
It was built primarily to handle gas from Azerbaijan, west of the Caspian Sea, but Erdogan says he sees no reason why it can’t handle additional gas from Turkmenistan, which lies just east of the Caspian.
“TANAP can transport gas both from Azerbaijan and Turkmenistan via Turkey to Europe”,
Erdogan said during a visit to Ashgabat
Erdogan and his Turkmen counterpart Gurbanguly Berdymukhamedov oversaw the signing of the agreement between Turkmen state gas company Turkmengas and private Turkish firm Atagas for the purchase and sale of Turkmen gas for TANAP.[11]
Turkey also embraced the idea that Iran can supply gas to Europe, and offered to broker negotiations with Iran. 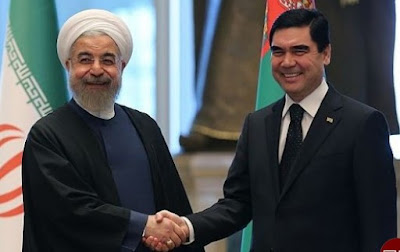 Iran is on the table

Iran was the first country that recognize Turkmenistan as an independent state, and since then the two countries have developed good relations[12] and have cooperated in the transport sector.
They have also developed the infrastructure and energy sectors, built terminals of liquefied gas and highways to increase bilateral relations.[13]
Iran has the largest volume of trade with Turkmenistan after Russia.
It has developed programs based on optic fiber communications, built bunkers and other facilities, in Merve, and a refinery in Turkmenbashi.
In 2009 approximately 100 industrial projects have been developed or are under development in Turkmenistan with the assistance of Iran.
The trade fell to 1.2 million dollars from 3.2 in 2008, largely due to the fall of oil and gas price.
Turkmenistan exports to Iran increased by 42% since January 2007, the most important being those exports of natural gas, oil, petrochemicals, and textiles.
In 2010, Turkmenistan sold 8 billion cubic meters of gas to Iran, from 5.8 in 2005 and provides 5% of Iranian gas demand.
Both countries have inagurated the Dauletabad-Sarakhs-Khangiran pipeline in 2010, to increase natural gas reserves of Iran to 20 billion cubic meters per year.
Turkmenistan is still exporting some gas to Iran, somewhere between 6 to 8 billion cubic meters annually, so Ashgabat can count on some revenue from those sales.
However, following the easing of relations with world powers and removal of international sanctions imposed on Tehran over its nuclear energy program, Iran will likely not be a customer of Turkmen blue fuel for much longer.
Moreover, construction of oil and gas pipelines through Iran would increase its strategic importance and lead to regional integration, trust building and enhancement of Tehran’s position.
Iran’s involvement in the energy of the region would increase its power. 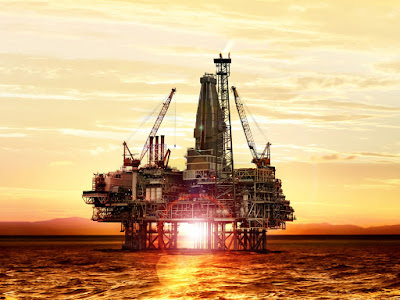 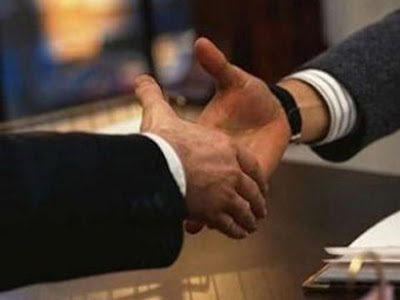 Russia has traditional relations with Iran, after building the Bushehr nuclear power plant, on the Persian Gulf coast.[14]
Russia will provide nuclear fuel, and will take it back after its consumption.
The two countries began discussions about creating an OPEC like cartel of gas[15] producing countries.[16]
On September 30, 2014, Russia and Iran have sign a mutual agreement with countries in the Caspian region, including Azerbaijan, Kazakhstan and Turkmenistan.
An alliance that refuses foreign military presence in the Caspian Sea, controlling any possible future troops landing in the region.
The agreement was signed by the presidents of the five countries on the Caspian Sea, at the IV Caspian Summit, held in Astrakhan, Russia, on September 29, 2014.[17]
The agreement establishes a fundamental principle to ensure stability and security in the region.
It states, that, "only riparian states at the Caspian Sea, have the right to have armed forces present in the Caspian Sea", according to a statement of Russian President Vladimir Putin after the summit.
His Iranian opponent Hassan Rouhani added, "There is a consensus among all riparian states of the Caspian Sea, through which they are able to maintain security of the Caspian Sea and no other military forces, of any foreign powers, should not enter into the Caspian Sea "-According to the state news agency Iranian PressTV.
This movement comes as a result of diplomatic problems that both  Russia and Iran encountered with the western countries, and sense the future presence of foreign military threat, in the Caspian Sea basin.
Due to the problems with former Soviet republics like Ukraine and Georgia, Russia has revised its foreign policy, leading to a new cold war.
At the same time Iran is concerned that western countries might use the Caspian Sea countries to put pressure on its nuclear program.[18]
Tensions between the United States and Iran, have turned the latter’s attention to Asia, and an idea of building a pipeline through Pakistan and India appeared, which would connect gas reserves of Iran and Persian Gulf, with infinite demand of resources, from China.
This project requires participation not only of Pakistan, India and China, but also Russia.[19]

This monumental project could change the balance of power, between Russia, India and China, on one side, and the Western powers on the other side.
Russia and Iran are particularly interested in US attempts to build a gas pipeline that  connects gas fields from Central Asia, with Europe.
The pipeline would bring to an end the monopoly owned by Russia, over  European gas market.
A monopoly held by Putin, to increase its influence in achieving political goals.
Russia became an opponent for the United States in construction of a pipeline alternative.

Aside from Russia, which still report considerable influence in Central Asia, the US and European Union's countries have also been active in the region.
Turkey has been particularly successful in gaining advantage, in the economic scene of post-Soviet Central Asia.
Also China, has pursued an active economic policy in the region and is increasingly involved in economic projects with the countries of the region, including Turkmenistan.
(One example is the Turkmenistan–Kazakhstan–China pipeline)

On the opposite side, the US, in the context of escalated Ukraine crisis, talks with Kazakhstan to establish a naval base for NATO needs, in the North-West of port Aktau.
Also the US play an active role to help Azerbaijan, Kazakhstan and Turkmenistan to increase their military effectives, in order to increase its influence on these states, that are still under Russian patronage.
The decision to close any opportunity of military presence in the Caspian Sea basin, hijacked any NATO plan to build bases, and may have had repercussions in the sphere of global energy security. 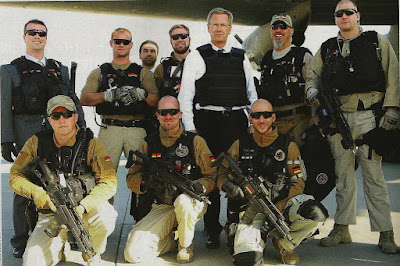